On Going Green and Gentrification

Lately I’ve been interested in urban design, green spaces, neighborhood character, gentrification and green development. This might be because my brother is an urban design major at UVA and his passion for the subject is rubbing off on me. It may also be because, as I’ve mentioned in a previous posts, I tend to go through a lot of phases. Things pique my interest, I research them, think about them and write about them until suddenly, they don’t interest me anymore. This particular phase started back in November when I joined a hiking group and realized that nature is actually quite nice. It’s relaxing, it’s beautiful and it’s probably one of the most important factors contributing to good mental health, at least in my humble opinion. 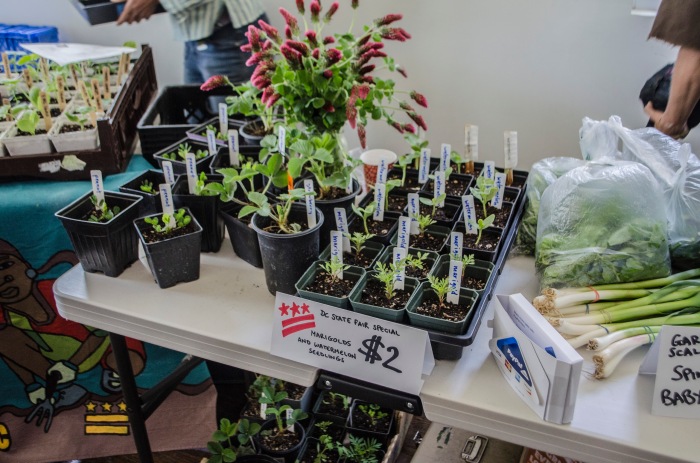 Seedlings for sale at the Seedling Swap. These come from urban farms right in D.C.

A few days ago, my friend Nora sent me this article, which basically discusses how the presence of (bountiful) trees in a neighborhood is a good indicator of wealth. As you may have guessed, the more trees a neighborhood has, the wealthier its residents. The more open spaces a neighborhood has, the less wealthy its residents are. The article talks about residents’ fears over green-induced gentrification and about Xavier Brown’s struggles and successes as the director of urban agriculture at an organization called Green Scheme, an organization that aims to educate D.C residents on the perks and benefits of trees and urban agriculture. I was intrigued by Xavier because he’s a native D.C local leader rather than an outsider coming to town and telling people what’s good for them. So I e-mailed him and told him I’d be interested in talking to him and learning more about his mission and organization. And he actually e-mailed me back and invited me to a seedling swap in the Mahaning Heights/Kenilworth Neighborhood in Northeast D.C. The purpose of the event was for people to bring seedlings to share and exchange with each other. There were also workshops on making elevated flower beds and composting. My interest in gardening and agriculture is purely theoretical (despite my childhood dreams of being a farmer) but it’s so exciting to know that this kind of local, progressive, diverse, grassroots movement is taking place right here in D.C. And Xavier seems so excited and passionate about what he’s doing – I truly envy people with that kind of vision and commitment to their mission.

When I lived in a middle class neighborhood in Bogotá, the lack of trees depressed me. In fact, nostalgia for suburban vegetation and landscaping was probably one of the major reasons I ended up leaving Bogotá. As someone from a middle class suburban background, I’ve grown up with trees, parks and nature (albeit contained, orderly nature) and being in a treeless, cement-colored landscape makes me feel a little…sad. It sounds dramatic, until you’ve been around trees and then suddenly you’re not. Like most cities, trees and green spaces tended to be a luxury for the rich in Bogotá. Upscale neighborhoods were somewhat quieter than their poorer counterparts and were often home to tree-lined streets and pocket parks, while impoverished neighborhoods were often bleak landscapes of shoddily constructed homes, questionably hygienic bars, alleyways smelling of urine, visible prostitution and crime, and, of course, “treelessness” and overall “greenlessness.” In some neighborhoods, especially in the south, You could walk for blocks and blocks without encountering a single green thing, except maybe some grass poking out from the sidewalk cracks. I’m sure my memories have been exaggerated and corrupted through time and bias, but because many parts of the city are “invasiones,” I think many people have more pressing issues to deal with than creating/maintaining green spaces. I can’t imagine what this does to the psyche, or at least what it would do to mine, to be surrounded by the gray/brown of cement, the smell of diesel and the constant sound of honking cars and screeching buses. I guess when you grow up with it it’s just part of life, part of the everyday routine, but for someone coming from a background where aesthetic beauty is highly valued (if taken for granted) it was a very difficult adjustment I was never fully able to make. I didn’t really think about trees and green spaces until these were more scarce and not as much a part of my everyday life. 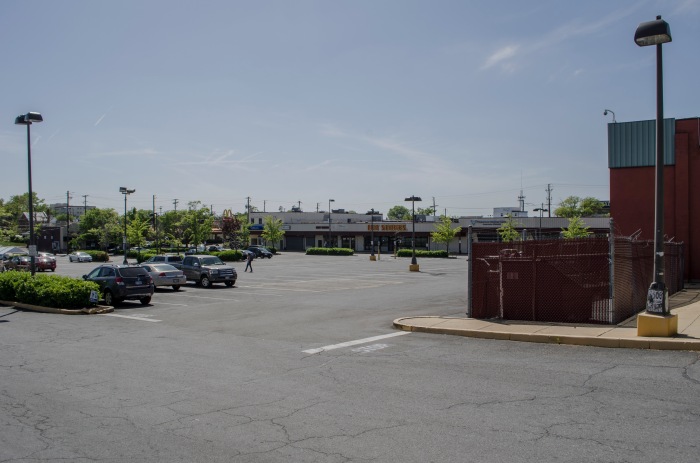 While the Mahaning Heights/Kenilworth neighborhood isn’t nearly as bleak as some of Bogota’s poorest neighborhoods, there is definitely a stark difference between how D.C feels east of the Anacostia River and how it feels West of the Anacostia River. I should state that I’m a D.C outsider, someone who grew up and currently lives outside the city, but the differences between these two D.Cs seem quite dramatic. You go from a mostly black city of wide streets, parking lots, open spaces, mostly one and two-story buildings and lower-end shops, stores and restaurants to a sparkling clean city of well-maintained row houses, newer condominiums, narrower, tree-lined streets and a significant upper-middle class white populations. Basically, you can physically feel the city change from “poor,” marginalized and socially disadvantaged to “rich,” and privileged in a couple miles.

Example of Zero-scaping at the Center for Green Urbanism, which will be closing down at its current location due to a rent hike.

The seedling swap was held at The Center for Green Urbanism on Benning Road, but it’s the last swap that will be held at this location because the organization has been priced out of the neighborhood. A new LEED-certified Gold library opened up and new condominiums are being built. Although the neighborhood probably has a long way to go before it becomes gentrified in the manner of U-Street or Chinatown, the seeds have been planted, so to speak. As other parts of D.C become more and more unaffordable for the average middle-class worker, it’s inevitable that educated but not as upwardly mobile urbanites (think non-profit workers) will start looking for more affordable neighborhoods to call home. I would love to move to D.C and be part of an urban landscape, but as someone who works in the social services field (meaning I don’t make much money) I can’t afford neighborhoods like U-Street, Dupont or Eastern Market, so if I ever did move to the city, I’d probably go for an “up-and-coming” neighborhood (read: slowly gentrifying, more affordable neighborhood). I often ask myself: How do I find a place for myself in D.C without taking someone else’s? How does a neighborhood absorb new, privileged residents without losing its intrinsic character and culture? These are often communities that have been in D.C for generations, communities that have contributed to the overall character of the city and who are part of the city in a way the transient middle class hasn’t been, at least until now. Because lets face it…most middle class folks who move to D.C move back to the suburbs when they decide to buy a home or start a family. I know it’s a natural process for cities to change and shift, but there is something so sad to me about long-time residents having to leave because they can no longer pay their property taxes or afford their rents. I think these are some of the central issues at the heart of gentrification and I’m pretty sure there aren’t any clear-cut answers.