Will my boyfriend leave me for a Colombian girl? 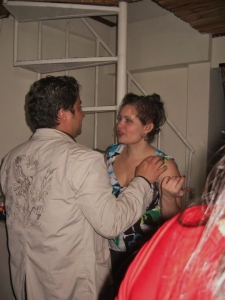 Getting my flirt on with a Colombian man back in the day.

1.) Colombian guys Womanizers: Yes, generally speaking, they are. Not all of course, but the idea that one woman will make one man happy for life is generally not a widely believed assumption among Colombian men, at least from my experience. However, you can be absolutely sure they will emphatically tell you otherwise. As my grandma (who is not particularly known for beating around the bush) used to say, Mijita, desgraciadamente los hombres Colombianos son una porqueria.”  I don’t entirely believe this because I’m an optimist and romantic at heart, but there you have it, advice from my 82-year-old Colombian grandma.

3.) Will my boyfriend leave me for a Colombian girl? I’m assuming this writer is an American/European who is moving/living in Colombia with her boyfriend. Dear searcher, I’d say the following: I don’t know. If your boyfriend is any combination of tall, North American/European, light-eyed and blonde-haired, he will be very popular with the Colombian ladies. And if your man is the kind who has trouble with monogamy I have bad news for you because Colombian ladies know how to turn on the charm and, thanks to a combination of genetics and excellent plastic surgery, they are quite attractive. I suppose you could say they offer a form of heightened femininity not seen much in North America and Europe. But I’d say if you are actually worried about this realistically happening, you may want to move on to another boyfriend.

4.) Do Colombian men have more than one girlfriend? Sometimes. I think this is due mostly to Colombia’s strong machista culture. Even though I found that Colombian women tend to be more “successful” than men career/education wise, I was sometimes surprised by how traditional men were when it came to their thinking about women’s sexuality. Thanks to my American nativity I didn’t find this out until after my marriage to a Colombian man. Oops. Anyway, your Colombian man will probably feel he is being faithful to you so long as he doesn’t fall in love with anyone else…but the same doesn’t apply to you.

I think this vallenato explains it well:

5.) Are Colombian men good in bed? This is so subjective. There’s really only one way to find out. Enjoy! Or not.

6.) Why do Colombian guys say suegra? I always wondered about this. A few months into my relationship with my then-boyfriend, he’d constantly refer to my mom as his suegra and everyone referred to his mom as my suegra. Obviously this doesn’t happen in the U.S. Can you imagine this scene? You’re dating a guy for a couple of months and you refer to his mom as your mother-in-law. Or you refer to your mom as his mother in-law. “Hey Billy, how about we go to my parent’s house today so you can hang out with your mother-in-law?” He would think you were a crazy chick and then he’d probably run very, very fast.

I’m not really sure what this is about. I guess Colombians don’t take things as slowly as North Americans and Europeans? Whatever the case, this premature association was always a bit jarring to me. During my time abroad I dated a few other guys in Panama and Colombia and suegra always came up during the first few months. It’s probably one of those things I’ll never understand as an American and doesn’t carry the formal weight it does in the U.S.

My other explanation is that in Colombia at least, the majority of people don’t actually get married. Unless you come from a historically higher class family or a particularly religious background, Colombians tend to move in together then part ways if the relationship doesn’t work out. In many ways, I think this may be a smarter tactic. I always thought that we do things backwards…people should live together, have/raise kids first, then, if they still love each other and want to be together after all that, get married. I mean, how many couples can you think of who’ve been married for 15 or more years and still seem happy? I think I can count them on one hand. I’ve tried to explain/promote this philosophy to others, but so far, it’s been shot down. Maybe Americans are more romantic than I give them credit for…

Anyway, back to Colombian men:

7.) I found out my Colombian boyfriend is married. Sadly, probably not that uncommon. But cheer up, chin up, move on! This just isn’t worth losing time and energy over.

8.) Do Colombian men make good boyfriends? I think that depends on your definition of “good boyfriend.” My Colombian boyfriend was always respectful and chivalrous. He opened doors for me, paid for meals and was very affectionate and attentive when we were dating. I’d just say that you have to establish early on what’s important to you. If things like monogamy aren’t particularly important to you and it’s more important to you to have someone who dotes on you and treats you like a princesa, maybe the answer is yes. In Colombia, it was common to see couples who’d been together for 25 years and still treated each other with affection and love. You don’t see that as much here. But I’d say there’s usually a price.

In my case, I ultimately decided that I wasn’t willing to pay the price, but I really think it depends on the person/couple. I think that even with the toughest breakups, you can eventually get to a place where you accept that things didn’t work out but you’re able to hold on to the good, happy moments and let go of the bad. I like to think I’ve gotten there, because even though things didn’t work out with my Colombian, there were plenty of fun, happy and significant moments and it would be a shame to forget those.

9.) Do women like Colombian men more than any other? Judging from all the Colombian-man related search terms on my blog, yes. Just kidding. I’m not aware of any world-wide survey on the most desirable men in the world, but I’d guess Colombians are not number one.

10.) How do you get a Colombian mother to like you? Well, I found Colombian mothers tend to like girls with “old-fashioned values.” In Colombia, people seem to think that American/European girls are fast and loose so if you can convince your suegra otherwise, you’ve won half the battle. Strangely enough, American/European men are generally regarded as good, loyal, faithful and desirable husbands. Aside from this, I’d urge family participation. Family is important in Colombia and the more you participate in your man/girl’s family functions, the more points you’ll get, because this makes you a girl/guy who values family. Many of the older Colombians I met seemed to think that Americans have no concept of family values or family togetherness. I think I’ve blogged about this before, but my grandma was always astounded that Americans send their kids off to college at 18.

Still interested in learning more about Colombian men? I have an entire category dedicated to this subject.