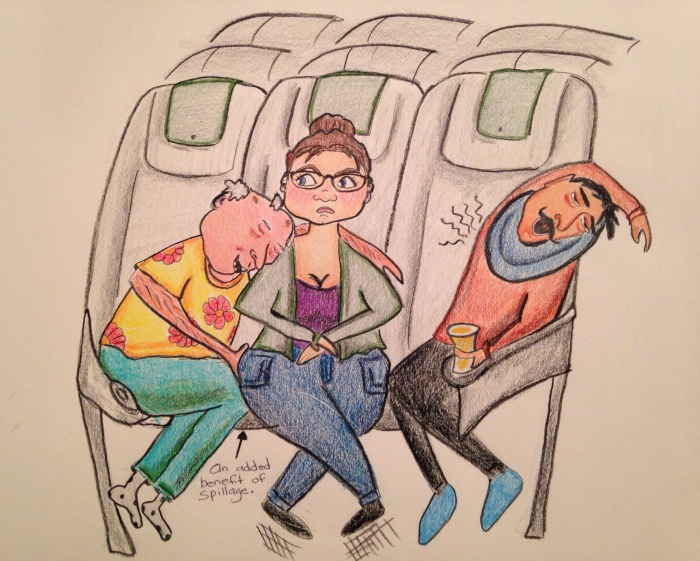 In real life, there was no Hawaiian-shirt wearing old snow bird asleep on my shoulder or a smelly drunken guy passed out on the aisle seat…but it was cramped. Sometimes you have to take artistic liberties to really get to the truth of a feeling. And things felt a little too close for comfort on this flight.

We had a great trip to Connecticut and I’m planning to post some Hartford pictures in the near future but first I’d like to discuss transportation, specifically flying. I hate flying. This is mostly because I am terrified of dying while flying. Give me one teeny tiny bit of turbulence and suddenly I become a Gregorian Monk, chanting the Lord’s prayer over and over until it’s smooth sailing (flying) again. I’m not an overly religious person in real life, but the thought of plummeting 30,000 to my death really makes me hope there’s something out there with the power to turn things around, literally.

On the way up to Hartford I had to sit in the middle of two really tall guys, which means they were both taking up their whole seats and I, of course, was taking up my whole seat, so things were a little cramped. When you are blessed with the body of a Botero model the last thing you want to do is sit between two football player-sized guys because there’s bound to be spillover. When you’re in the middle seat you can’t exactly lean into the window or the aisle…I tried sliding down my seat a bit to see if I took up less space that way, but it soon became apparent it would be a tight ride for me and my seat buddies. But it was only a one hour flight and I survived with a renewed resolve to stick to my jogging routine to avoid future spillover situations.

We were supposed to fly out at 7 pm on Sunday but our flight was cancelled at 10:30 pm. And was the lady who rebooked us on another flight apologetic and professional? No. the whole time she talked about how much Continental sucks and how hard she partied yesterday with her 22-year-old daughter. Then she talked about how she took her white dude coworker Puerto Rican dancing and then her white dude coworker came up to us to confirm the fact that he had, in fact, gone Puerto Rican dancing and it was the most humiliating thing ever but he had fun. I could empathize with the humiliated white dude and the hung over Puerto Rican lady (as a terrible dancer with a penchant for Long Island Ice Teas I’ve been there, done that), but they weren’t really helping us get home.

But then there was a ray of light. The airline was putting us up in a hotel for the night! I love nice hotels! Initially I was excited. Last time I had a flight cancelled I was in Shanghai and this involved a stay at a 5 star hotel, complimentary (and delicious) dinner and the most decadent buffet breakfast I’ve ever had. So my spirits were high and even though I knew I’d probably have to take a vacation day due to a flight delay, I was feeling alright because I knew I’d soon be surrounded by hardcore luxury.We were shuttled to the Double Tree Inn — a pretty good hotel  when you’re used to staying at the Econo Lodge — but not exactly the luxury I was expecting after the whole Shanghai experience. And the airline gave us a $7 lunch voucher, which could only be used at the airport. $7????? What kind of lunch can you buy at an airport for $7? It appears United Airlines/Continental have not kept up with inflation since 1992. The next day I bought an apple juice and half my lunch voucher was gone. There was no complimentary dinner or breakfast and unlike that Shanghai hotel which figures so prominently and fondly in my memories, no fancy personal Jacuzzi or poofy white slippers greeted me at the door to my room.

But really, aside from having to take a vacation day, it wasn’t so bad. I just like complaining dramatically. I recognize these are not exactly serious problems. We eventually got home, vacation came to an end and life returned to normal. Hopefully I’ll have some time to post picture of our trip this week!

Tags: $7 lunch voucher from airline, Cramped on a plane, flying sucks, trials and tribulations of flying