I don’t think this picture fully does justice to the sunburn situation my sister and I find ourselves in, but I can tell you that I’m burned to the point where I feel like I can’t open my eyes all the way.

I think that today my sister and I overdid the whole exploration thing. We happened to come to Bogotá during an abnormally sunny and warm spell — in the three years I lived in Bogotá I never experienced so many sunny, rainless days in a row — and despite our best attempts at full sunblock coverage, we look like a pair of formerly albino patchy lobsters who spent three days laying out in the beach without sunblock. I don’t know how it happened, but I have strangely shaped burns on my neck and chest and my sister’s forearms have identical square burns. So even when this turns into a tan, it’s going not going to be a particuarly attractive one. But enough about our burn situation. In previous blog posts I talked a little bit about the changes I’ve noticed here in Bogotá since I left 2.5 years ago, and I have a few more observations/questions I’d like to explore:

1.) I’d like to know where all the street windshield washers went! Back in the day, whenever your cab or car would stop at a traffic light, you’d have a windshield wash forced on you, usually by a teenage guy who your driver would then give a few coins to. It was pointless for the driver to try to decline the wash, because it was going to happen no matter what. But since I got here on Saturday, I’ve yet to see any windshield washers! In fact, I’ve seen a lot less traffic light vendors in general. Did the city crack down? Did they all move to Chapinero or the Center or the South? Did I just happen to walk down streets they avoid? And if there was a city crackdown, how are all these guys making a living nowadays???

2.) Happy hour deals! When I was living in Bogotá, happy hour existed, but happy hour prices did not, at least as far as I remember. And when you’re spending almost $10 for a fruity drink, it’s really more like sad hour. Today, my sister and I walked down to the Zona T and I am happy to report that it appears there are now actual happy hour deals. Most of the deals I saw were “two for the price of one” deals, which means two cocktails for about COL$16,000 (about $9 U.S dollars). I’m sure there are cheaper deals in other parts of the city, but compared to what I was paying back in the day for cocktails when I’d go out in la Zona T, that’s not bad! And, in case you’re interested, a beer at a “budget” bar usually ran about $1-$2 back in 2011. Those kinds of establishments didn’t usually serve cocktails.

3.) Bogotá is a massively huge city! This isn’t actually a change…it’s been massively huge for a while, but I don’t think I ever fully realized just how huge it is. I did a little Wikipedia research today and discovered that Bogotá is over 600 square miles (as a comparison, D.C is 60 square miles and the entirety of New York City, including all five boroughs, is 300 square miles). The city runs about 200 blocks to the north and 200 to the south and it’s got to be, I don’t know, at least 100, 150 blocks wide. Wikipedia informs me that the population is over 8 million, with a population density of 13,000 people per square mile. Just thought I’d share some fun Wikipedia statistics!

4.) No catcalls! I wrote a lot about Colombian catcalls when I was living in Bogotá and as much as I said I hated them, tonight I am sad to report that I’ve yet to receive one catcall this time around. I’m the first to admit I don’t exactly look great right now…I’m, shall we say, a little rounder than I’d like to be, my face is patchy and lobster colored, I have no sunglasses so I’m constantly squinting, I have no fashion sense to speak of, and I’ve been walking around in these ugly gray snowboots I bought at Target for $20 (I really should have packed better…I only brought hiking shoes and winter boots. I guess that’s what happens when you pack 20 minutes before you need to be at the airport). Anyway, no, I don’t look great but still…nothing??? That seems a little harsh, Colombian construction workers. I guess I better keep doing that 90 day fitness program. But at least there are decent happy hour specials now to make me feel a little better.

So those are some of my observations from today. Our walk today consisted of going from my grandma’s apartment to the Zona T (an upscale party district home to lots of bars, restaurants and clubs) to Los Rosales, one of my favorite Bogotá neighborhoods and home to the Zona G, home to many fancy shmancy restaurants. I feel like I’ve only been seeing wealthy Bogota this time around, but because we’re only here a week and Bogota is so immensely huge, I probably won’t have a chance to visit some of the old, less ritzy places and neighborhoods I frequented back in the day. But anyway, here are some pictures from our adventures today:

This is a little canal trail near la Zona T. It existed even back when I was living in Bogotá, but it does seem that Bogotá, at least northern Bogotá, has gotten signficantly greener. It seems like there’s a park every couple blocks, which I think is probably a necessity in a city with as much traffic, noise and pollution as Bogotá. I don’t know if the Chapinero, the Center, the West and the South are seeing the same “greenness,” but I do hope so. I love urban parks and I think they do a lot to make a city livable. 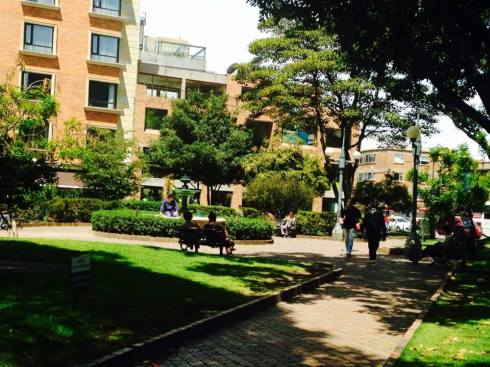 A small park near the Zona T.

An example of the street vendor carts I talked about in my previous posts. I’d say this one is pretty clever…just take a shopping cart and turn it into a little mobile shop! This cart is located on the Zona T, so I’m sure there are plenty of drunkards every night looking to buy cigarettes, make calls or maybe buy some candy or gum.

My sister pointed this out to me. How do you feel about this guy’s lunch delivery system?

My sister and I were getting a little tired of the corrientazo (which usually consists of rice, potatoes, plantains or yuca, a tiny “salad” and pan-fried steak, fish or chicken), so we decided to treat ourselves to a non-fried lunch. We decided on Wok, a pretty big Asian fusion chain in Bogotá (not sure if it’s national). In case you’re interested, Wok would probably be considered slightly above mid-range here in Bogotá. Our meal was about $35.00 with drinks, an appetizer, tip and tax. The nice thing about Bogotá restaurants is that a lot of them have really nice patios like this one. For the most part, you can expect to pay $3-$6 for a budget meal (which usually includes soup, your main dish and a natural fruit juice), between $8-$12 for a midrange meal (which would likely not include anything but your main dish) and maybe $15 and above at an upscale restaurant (which would definitely only include your main dish). 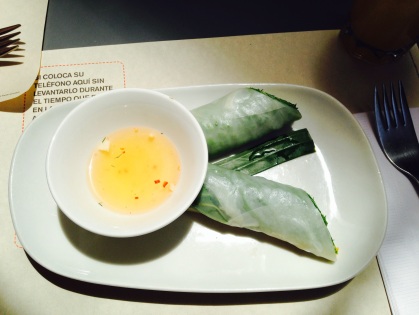 Wok is one of the few places I know of in Bogotá that sells something that resembles a Vietnamese summer roll. If you are one of my few faithful blog readers, you know Vietnamese summer rolls are my all-time favorite food and they make me very, very happy. These weren’t exactly what I was used to, but it felt great to eat something not fried!

I ordered the chicken-calamari Pad Thai and my sister ordered a chicken/squash curry dish. Both were good. My sister’s was supposed to be spicy, but as one might expect in Colombia, the so-called spiciness was undetectable.

This is from inside one of the many malls at the Zona T. I was reading on Wikipedia today (source of all my information) that Bogotá currently has over 100 malls with 160 in the planning stages. How is this even possible??? 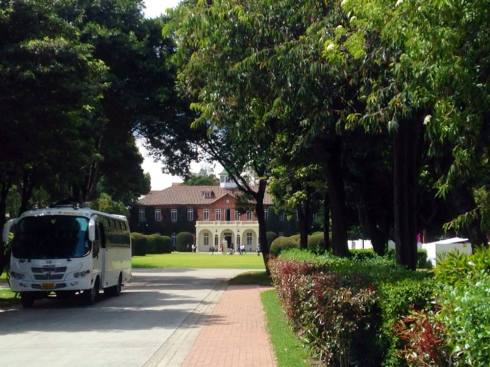 My sister and I were walking down la Septima from La Zona T to Los Rosales when we saw this beautiful, idyllic campus with sprawling green grounds and unusually attractive, well-maintained buildings. We found out it is the Gimnasio Moderno, which Wikipedia describes as a traditional, all-male liberal primary and secondary private school founded in 1914. I thought it was pretty, so I took a picture.

By the time we made it to Los Rosales we were in pretty bad shape. I was experiencing burning foot sensation thanks to my too-big snow boots, my sister was barely mobile thanks to her blister situation (she shouldn’t have tried out her new shoes during a 50-block city walk!) and we were both becoming keenly aware that a sunny Bogotá is no place for the fair-skinned or the easily burned. But we made it. These structures are examples of the traditional housing style in this part of the city (Los Rosales, Chapinero Alto, Chapinero, Quinta Camacho). The majority of these old house have been converted into restaurants, bars, shops or apartment and some are in pretty bad shape (especially in Chapinero) but I quite like them. They’re imposing, somber, inconsistent and elegant, kind of like Bogotá.

Los Rosales is home to the Zona G (Gourmet Zone) where you’ll find some of Bogotá’s best restaurants, mostly housed in the old Tudor/Victorian style (not sure if this is the actual architectural style, but I’ll go with it)homes pictured above. Los Rosales is one of Bogotá’s traditionally exclusive, upscale neighborhoods and although arguably nicer apartment complexes have been built further to the north, it’s still my favorite in the “upscale neighborhood category.” It’s hard to tell from this picture, but those brick apartment buildings that back into the Andes (some are actually built into the mountainside) are still among Bogotá’s priciest real estate.

Back when I lived in Chapinero Alto, Diletto was my favorite cafe. I’d have a cappuccino or passion fruit smoothie and blog about the city for hours. Even though my sister and I were burned and blistered, I really, really wanted to have a coffee here. Because of my lackluster sense of direction it took me a while to find Diletto, but we finally made it! 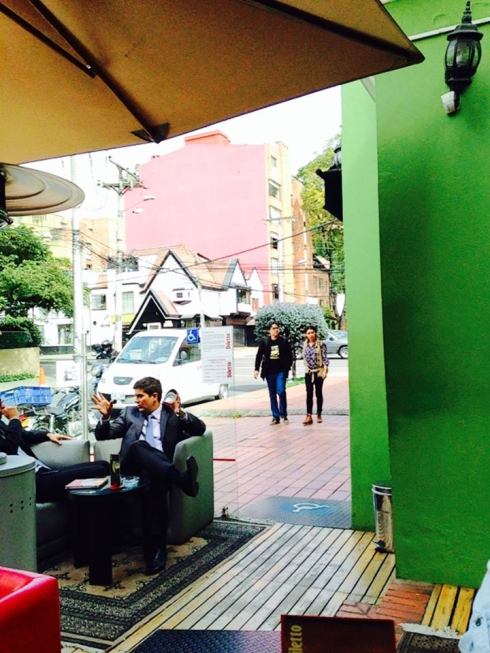