The main scenic drive in Saguaro National Park East. The Rincon Mountains in the backdrop.

One of the most interesting and rewarding things about traveling west is observing how much the terrain changes in relation to elevation. On our way north from Phoenix to Flagstaff to the Grand Canyon, we saw the landscape change from jagged, barren mountains to low-lying shrub and grass prairies to Alpine-looking Ponderosa Pine forest. All on a three hour drive! On this particular trip, I was most interested by the lowland desert landscape (lets say, 1,200 to 3,000 feet) of southern Arizona, mostly because the vegetation in this area is so different from anything I’m used to. Although I spent most of my life thinking of Arizona as a sort of Cactus Siberia, a barren place where only the ugliest and bleakest life forms survive, the Sonoran desert is actually quite green. And alive. Maybe not in an eastern woodlands-nearly impenetrable canopy kind of way, but there’s more life and vitality here than you’d expect, and in many ways, animal and plant life is actually more accessible.

A lookout at Saguaro National Park East. There were very few people at this park, and we saw just a handful of cars on our drive. I’m not sure why this park is so empty — it was really beautiful and worth exploring.

In Virginia, the undergrowth and trees are so dense that without  binoculars or eagle eyes, it’s often hard for me to spot anything other than squirrels, common birds or white-tailed deer. During our hikes at Saguaro National Park, Catalina State Park and the Tucson Mountain Preserve, we saw coyotes, mule deer, white-tailed deer, jack rabbits and mountain goats, all without wandering far from the beaten path. And thanks to a book on common birds of the southwest that I bought at the Arizona-Sonora Desert Museum, I know that some of the birds we saw included the red-tailed hawk, turkey vulture, American kestrel, Gambrel’s quail, greater roadrunner, gila woodpecker, western blue bird and phainopepla, slender little birds that resemble cardinals, except they’re all black. Except for the turkey vultures, all were exotic to me. 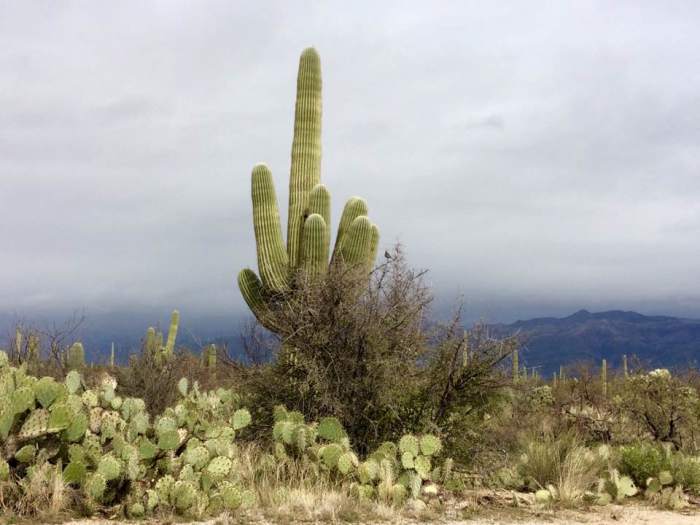 A Saguaro Cactus. This one is probably about 150 years old and grows extremely slowly…it might only be two or three inches tall when it’s five years old. There are all kinds of alien-looking cacti and succulents in the Sonoran Desert, most of them with cool-sounding names like teddy bear cholla, jumping cholla, pancake prickly pear cactus, purple prickly pear cactus and my favorite, the pineapple cactus.

The tallest “tree” in the Sonoran Parks we explored is the saguaro cactus, which grows to a height of about 40 feet. Aside from the dozens of nest cavities carved out by generations of woodpeckers on just about every mature saguaro (holes that eventually become homes and heat shelters for many bird species) there are just not all that many places for wildlife to hide. The desert is an open, unprotected landscape: no canopy, no dense undergrowth and no carpet of dry leaves to hide in or under. The cacti and succulents that thrive here need space to grow, leaving gaps between plants and making for easier wildlife-spotting, though it also helps that my husband grew up in the rainforest and his eyes are trained to pick up on the slightest movement. I think the Sonoran Desert made me feel more exposed and connected to nature than I have in a long time because I was able to differentiate between many of the individual components that make up the  ecosystem. It was easy to tell the difference between a jumping cholla and a prickly pair cactus, and it wasn’t particularly challenging to spot the long-legged jack rabbits or family of quail taking shelter in the limited shade of the desert’s low-lying vegetation. 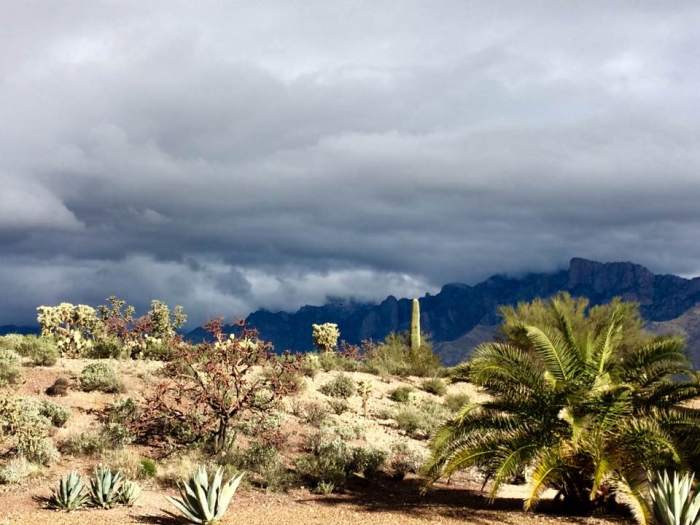 Desert sunset before the rain at Catalina State Park. Probably my favorite hike of our trip.

Being in southern Arizona also made me think about water more than I ever do when I’m home, where rain is usually a common occurrence. Streams, and even rivers in the lowlands of southern Arizona, are intermittent and rarely perennial. From Phoenix southward, we saw many dry riverbeds dependent on the winter and summer rains — which may or may not come — for their short, ephemeral lives. These river skeletons– thin, sandy indentations where water once flowed, probably briefly, were kind of disconcerting. It’s rare for a river or even a creek to completely dry up in Virginia, so on some of our Sonoran hikes, I felt like we were walking through a maze of ghost rivers. It was a foreign, almost alien landscape, which was kind of eerie, but also magical.

On our first day in Tucson, our Airbnb hosts suggested a short, 2.5 mile walk at nearby Catalina State Park. It had rained heavily for a couple of days before our arrival, so on this particular hike we had to cross six or seven small, temporary streams, the first we saw in southern Arizona. At our first crossing, I was surprised to find couples and families sitting on boulders, listening to the sound of a gently flowing stream cutting train tracks in the sand. I guess in southern Arizona the sound of flowing water is seasonal, and rare enough that it warrants observation and enjoyment.

A surprise rainbow at Catalina State Park. It actually became a double rainbow a few minutes later, but it didn’t photograph well.

Intermittent stream after a few days of winter rain. It was during this hike that I found out my hiking boots aren’t waterproof. 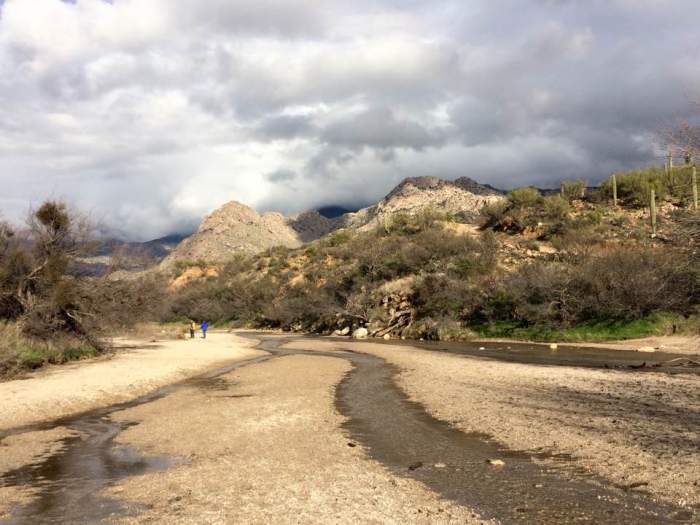 People were hanging out here to listen to the sound of flowing water.

Now that I’m back in Virginia, I’m amazed by how much permanent water there is everywhere — and by how little I’d noticed it before. Before this trip, creeks were unremarkable to me — as common and unexceptional as grass, geese and white-tailed deer — in other words, nothing to stop and smell the roses for. But now, I find myself drawn to the large stream valley in the center of my town, where a long, wide creek winds its way through pockets of lowland forests and sporadic wetlands, surrounded by a dense ring of suburban homes.