Home › Random › Uncategorized › Deergate 2019, or What I’ve Been Doing All Summer.

Deergate 2019, or What I’ve Been Doing All Summer.

It’s been a very domestic summer. Since our Memorial Day trip to upstate New York, we haven’t wandered more than 20 miles from home. So far, the number one highlight of my summer has been getting sucked into (as a spectator, of course) a spectacularly suburban fight on Nextdoor.com. Do you know what Nextdoor.com is? If not, I highly recommend it. It’s this neighborhood website where neighbors request recommendations for things like plumbers, cars or electricians, and give away things like expired car seats and training potties. There are Neighborhood Vigilantes who make it their business to put a stop to the ever-increasing crime that plagues the mean, sycamore-lined streets of my census-designated unincorporated community. There are reports of suspicious neighborhood activity, such as children vandalizing fences with chalk-graffiti (It could be gang-related! They recruit them early!), as well as classic postings about packages being stolen from neighbors’ front doors. As you can imagine, things sometimes get ugly when neighbors have free reign to comment from the comfort of their screened-in sunrooms.

The fight I referred to above was not about stolen packages or kindergarten gangsters. It was about feeding the neighborhood deer. There’s this neighbor, I’ll call her The Patron Saint of Wild Animals, and she posted what she thought was a whimsical story about a buck deer taking an apple right out of her hand. Apparently, she sometimes throws her food scraps in the yard to feed the squirrels and chipmunks, (rodents with tails) and a deer happened to present himself and request some apple scraps. Well…this exploded into a whole ethical drama about the moral implications of keeping wildlife wild and ensuring that wildlife maintains a healthy respect for humans vs. “aww, how cute the deer ate right out of your hand!” (If you must know — and I know you must — I sided with the keep-wildlife-wild crowd. This is mostly because I’m a hardcore rule-follower and The Patron Saint of Wild Animals made a posting last year about feeding the neighborhood foxes, and she was very proud of her fox-feeding ways. This was not her first offense. As Mitch McConnell might say, She was warned. She was given an explanation. Nevertheless, she persisted. Last year’s Foxgate resulted in all kinds of heated words and a polite but stern warning from the neighborhood police officer reminding the Patron Saint of Wild Animals that feeding wildlife is against Ordinance something or other. The Patron Saint of Wild Animals was deeply offended that the majority of her nextdoorians came out as anti-Fox-feeding and reported her to the authorities, so she wrote a long and dramatic goodbye on the message board (at least, if memory serves me right, it was after this particular heated exchange — she’s been involved in several), but as far as I can tell, she never actually quit Nextdoor. I don’t think she can quit. She’s kind of the queen of Nextdoor, and honestly, Nextdoor would be nothing without her.

Back to Deerhate 2019: The Patron Saint of Wild Animals eventually deemed all the naysayers ridiculous and closed the comment section. I was truly heartbroken because things were really getting out of control, and I felt like the fighting could go on forever. I really feel like this conflict could have grown to epic proportions, and it never really got a chance to reach its potential. No one has posted anything remotely controversial since then.

Anyway, below are some summer highlights. Although nothing can compare to Deergate 2019, we’ve tried to make the best of what’s turned out to be a soupy, stifling summer after a lovely spring. I’ve been doing some (very little) reading. These are my summer reading accomplishments, thus far (see my goodreads for reviews; name: Jisel).

We hung out at a winery so we could feel classy and indulge in hedonistic consumption of cheese and salami. It was there that I discovered I can no longer drink because I get really hot and turn red and sweat profusely. Basically, a vaccine against future alcoholism. I went on a lunchtime walk to a swamp and sweat profusely and got bitten by bugs. I enjoyed the manicured perfection of my aunt’s patio and garden on the Fourth of July (from inside the house because it was raining).

I took gothic/unsettling pictures of the neighborhood HOA while admiring its landscaping. We’ve gone to the pool a few times. My daughter still isn’t sure how she feels about pools. I became the pool whisperer of babies. 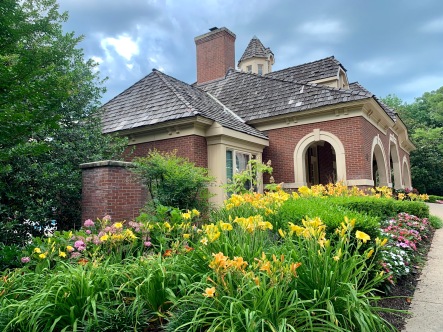 After reading Pachinko, I decided I must try Korean food. I live in a town with a very large Korean population, yet, aside from the occasional Korean baked good, I’ve never tried Korean food. A brief Google search told me there are about 30 Korean places in town, and I made a reservation at the top-rated Korean BBQ place. It was like entering an alternate universe! Behind the sad brick exterior of a tiny strip mall right off route 29, I entered a warehouse-type restaurant full of young people and open-fire grilling! It was amazing! There were twenty-something men with bushy beards wearing patterned sleeveless shirts!!! There was a good beer selection!!! There was a giant chalk picture of a cow and I do t think it was the kindergartners! My mind was exploding with exclamation marks!!!!!!!!! For the reasonable price of $29 per person, we got unlimited servings of Korean side dishes, spicy squid and octopus, marinated chicken, brisket and ribeye. What other secrets does Centreville hold??? 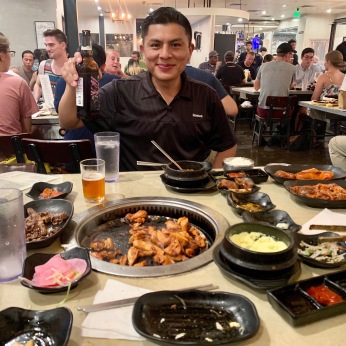 We’ve been traveling the faux-nature trails of Centreville. I tried to take an artsy picture of our house, and while doing so, thought: This townhouse would be considered a multi-family building in Holland, but here, it’s on the small side of average, Everything IS bigger in America. We’ve been touring neighborhood playgrounds with wild abandon. My favorite one is the one framed by shade trees on three sides. I admired my neighbor’s garden. I saw a painting on my first grade teacher’s facebook feed titled Afternoon Tea, and realized I’ve never wanted anything more than to be the woman in the painting. I want to live in a leisurely, impressionistic world of floral curtains, summer hats and fancy tea sets. I want to blow up this painting and put it on my vision board. 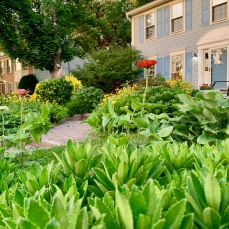