At some point I’ll write an in-depth blog post about this trip to Colombia, but I’m too lazy to do that now. We had a good time, my 87-year-old grandmother got to meet my 17-month-old daughter, and I had a chance to explore the motherland. I also ate tons of carbs and pounds upon pounds of queso fresco.

My grandmother was terrified when we told her we were going to La Candelaria and basically told me it had become so dangerous we would most certainly be robbed, most likely at gunpoint, and it would be ugly. But such warnings are nothing new. To appease her, we took a free government-operated tour of La Candelaria instead of walking around on our own, and then walked around on our own after realizing my grandmother’s warnings were a tad dramatic. I do have to say that having a child has made me more fearful. I analyze risk differently. But anyway…the tour was lead by an affable and very Colombian man. It was actually a highly informative tour and I highly recommend it if you have a few hours in Bogota. Unfortunately, I have a very poor memory for these kinds of things and don’t remember much of what I learned, except that Bogota was burned down on at least one occasion, and the Muisca were a confederation, and not an empire, which is why they aren’t as famous as the Inca, Aztec or Maya. This is the top of the Candelaria neighborhood. This is the oldest neighborhood in Bogota and is a complex mix of colonial/old-world charm and grungy, heavily graffitied grittiness. Lots of young people, students, pot-smokers and bohemians, as far as I could tell. 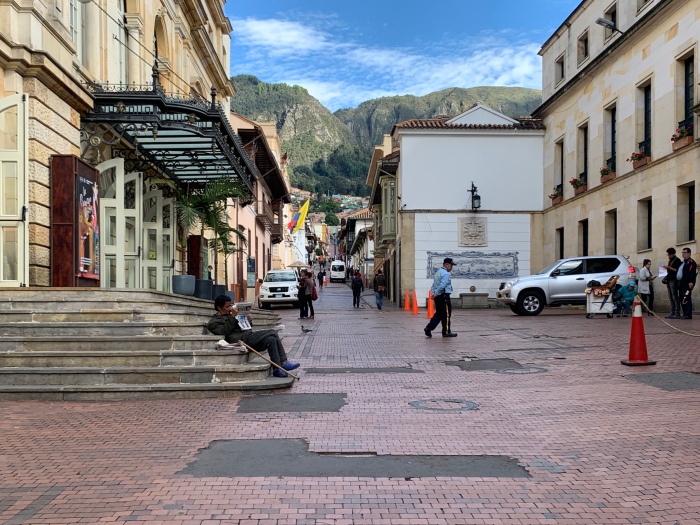 This is the Plaza de Bolivar looking toward La Candelaria. There used to be an (apparently) homeless man with an (apparent) substance use issue who used to hang out in the Plaza de Bolivar, shouting Bogota history all day long.  He’d provide a tour and information about Bogota to anyone who’d listen (you can find him on Youtube) but I didn’t see him this time. It’s the first time I’ve been to the Plaza de Bolivar and not seen him. As you can see from this picture, Bogota sidewalks are still a disaster. The Centro felt pretty rundown and dilapidated to me this time around; there’s heavy construction happening on La Septima (the main downtown thoroughfare), but I still love it. There is something so nostalgic and melancholy to me about El Centro de Bogota to me; it fills me with a sense of longing I can’t quite understand. 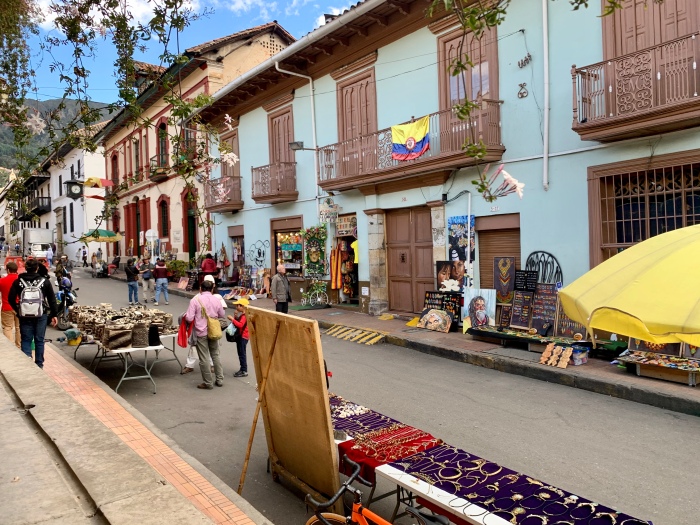 This picture was taken in La Candelaria from the Gabriel Garcia Marquez Cultural Center, given to Bogota by the Mexican Government. This is probably one of the nicer streets in La Candelaria, not marred by some modern concrete monstrosity. Next time we go to Colombia, I’d like to spend a little more time in this neighborhood. I remember there was this old train car converted into a coffee shop — I would’ve liked to stop there, as well as the cafe at the Botero museum.

Trip Advisor suggested this restaurant, called “El Mejor Ajiaco del Mundo.” It was alright — just regular Colombian food, about double the price of the same meal on the other side of Plaza de Bolivar. We couldn’t find the restaurant at first, so my husband asked a cop on the street where he could find El Mejor Ajiaco del Mundo (The best ajiaco ((a type of soup)) in the world). The cop gave us a weird look at told us he didn’t like soup.

This is the Plaza de Bolivar, home to more pigeons than people. I am sad to report we only found one chontaduro seller in the entire plaza. According to my husband, there is a fungus spreading throughout Central America that is seriously affecting the chontaduro harvest. Maybe it’s already gotten to Colombia. If you haven’t tried chontaduros, you are missing out; they are starchy and greasy and delicious with salt and honey. Anyway, our Bogota tour started in La Plaza de Bolivar, and one thing I remember is that the Capitolio Nacional was accidentally built backward. The front of the Capitol is actually facing away from the plaza. “How could such a mistake possibly have happened?” we asked our guide, who told us simply: “This is Colombia.”

So, People eat a lot of chicken in Colombia. At least my grandma does. My husband got tired of chicken and we escaped to a steakhouse in La Macarena. La Macarena was one of my favorite neighborhoods in Bogota back when I lived here. Like El Centro, it feels melancholy and nostalgic to me, but also artsy and fartsy and left-leaning. It’s rundown and bougie at the same time; some streets feel seedy and dangerous and some feel upscale in a funky/bohemian kind of way. It felt more rundown to me than it did when I lived in Bogota 10 years ago, because 1.) Maybe it actually is more rundown or 2.) I’ve gotten old and boring and accustomed to the picture-perfect if antiseptic outer suburbs of D.C. and my tolerance for grittiness has plummeted, alongside my idealism and artistic self-fantasies (more likely). If I ever move back to Bogota, La Macarena is one of the neighborhoods I would seriously consider. Here’s a nice write up on La Macarena, in case you’re interested. 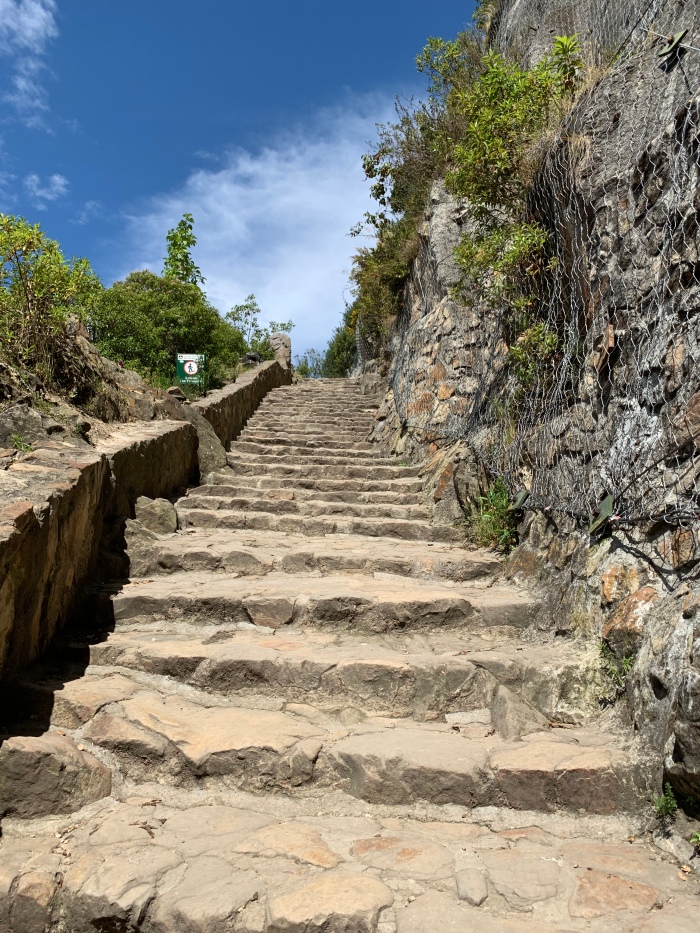 These are the stairs to Monserrate, a 10,341 foot mountain overlooking Central Bogota. There is a church, a couple restaurants and food kiosks and a bunch of tiny souvenir shops on the top. We took the cable car up and walked down. I could barely walk for the next three days. But I was impressed with the quality of the trail.

A view from Monserrate. I believe the area with tall buildings is the International Center. Much of the city outside of the upper middle-class neighborhoods is made up of utilitarian one and two-story cement houses, as you can see from the flat, sprawling cityscape here. I’ve explored much of Bogota’s eastern, northern and central areas, but I’m not all that familiar with the west or south.

As you can see from the tree on the right, Colombians take Christmas decorations very seriously. We went in early November and the city was just starting to gear up for Christmas. 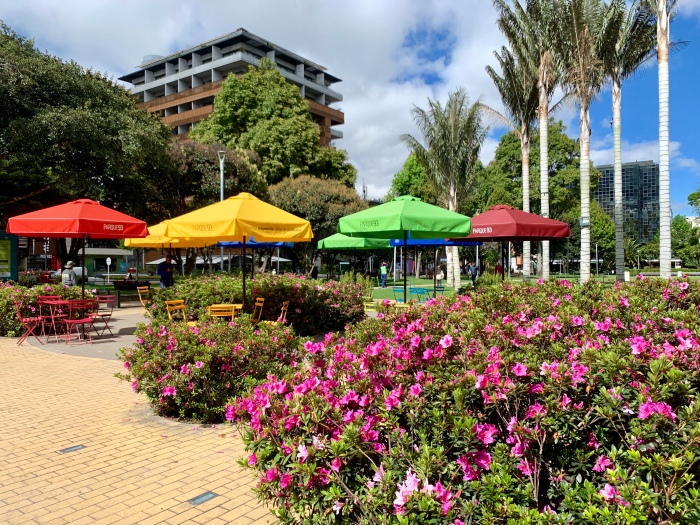 Parque de La 93. This is one of my favorite urban parks in Bogota. It’s green and lovely with an impressive playground and several good restaurants framing the park. It’s also an easy walk from my grandmother’s apartment. We had a coffee at the corner Juan Valdez and ate at the Crepes and Waffles twice. Definitely not the fanciest of culinary choices, but I have a soft spot for Crepes and Waffles;  I have many fond memories of me and over-sized, prepackaged ice cream goblets at Crepes and Waffles all over Bogota.

Parque El Country. This is a beautifully,  dramatically situated park a short walk from my grandmother’s apartment. It was uncharacteristically warm the day we walked here, and there were hundreds of people playing soccer, working out, jogging, walking and playing. Everyone over 65 years was appalled that I didn’t wrap my daughter up like a  Siberian Tundra baby, and I faced A LOT of resistance for taking her out without a jacket in almost 70-degree weather.  The women in my family appear to have an almost pathological fear of cold-born diseases.

Stretching in the shadow of the Andes Mountains.

This was a neat park in the Santa Ana/Usaquen neighborhood: A bunch of outdoor gym machines. I have to say I was pretty impressed by the quality of parks in Bogota. 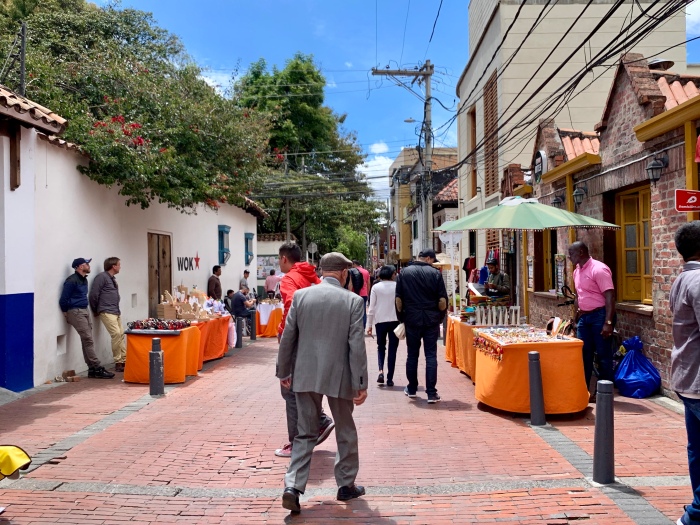 A side street in Usaquen. My mom spent some of her formative years in this neighborhood, before it was fully integrated into Bogota. It’s quaint and charming and all that; I used to love it, but I didn’t like it as much as I used to. I’m not sure why.

I want to take a moment here to say that the Bogota you see in these pictures is not representative of how most Bogotanos live or what the city looks like as a whole. I wrote about this last time I went to Bogota, but Bogota is not a particularly beautiful place. It’s complex and vibrant and layered, but Paris/Venice/Amsterdam beautiful, no. Most of the city looks like this. But we were tourist-ing and it was my husband’s first time in Colombia, so we were hitting the highlights. My family is more or less middle and upper-middle-class so we mostly explored Bogota from that lens, though I think I could live in Bogota for decades and still never fully understand the nuances of class. Next time we go to Bogota, I hope to stay for at least three weeks and get a deeper feel for where the city is now.

Now on to Villa de Leyva, a small, heavily-touristed town about three hours outside of Bogota.

The Saturday morning Villa de Leyva Farmer’s Market, where you can buy everything from breakfast, to ruanas to leather knife holders. My husband had gallina (lady chicken), potatoes and plantain and bought himself a wool poncho.

The farmer’s market was cheap by U.S. standards. A pound of raspberries cost about 75 cents, as did 12 mandarins. I’ve actually been to Villa de Leyva a few times before, but this was my first time at the farmer’s market.

I read somewhere that the Villa de Leyva main plaza is the largest in Colombia and the largest fully cobble-stoned plaza in South America. I can report back that it is, indeed, pretty large. I also read somewhere that the only reason Villa de Leyva maintained its colonial look is because the nearby mountains had no minerals to exploit, so it was a sleepy, mostly forgotten town until it was (re)discovered by Bogotanos looking for a weekend getaway. Nowadays, being in Villa de Leyva on a holiday weekend feels like being in Venice in July. 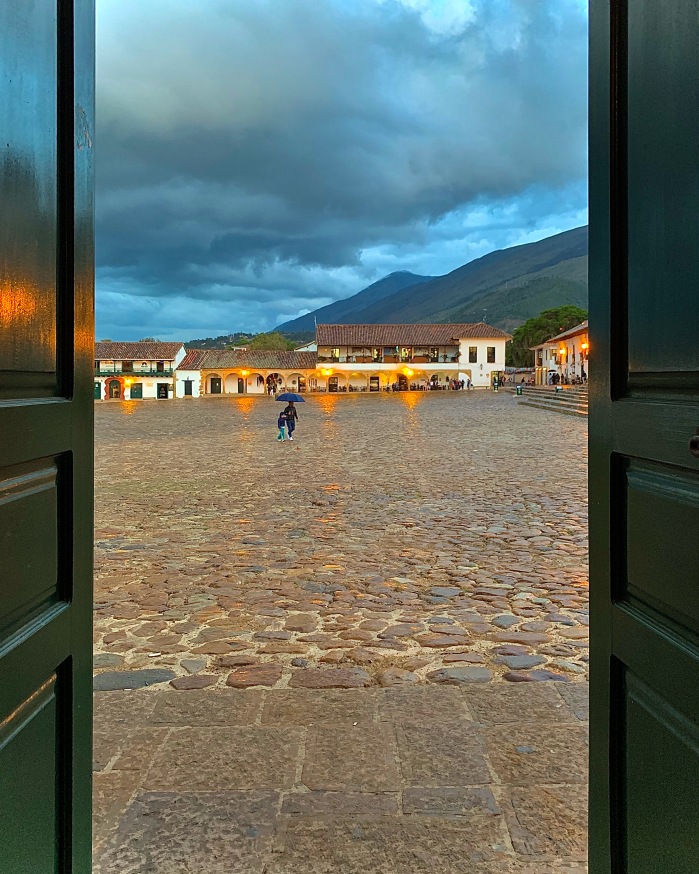 We got caught in a late evening storm and took shelter in an indoor mall.

The plaza on a clear evening. 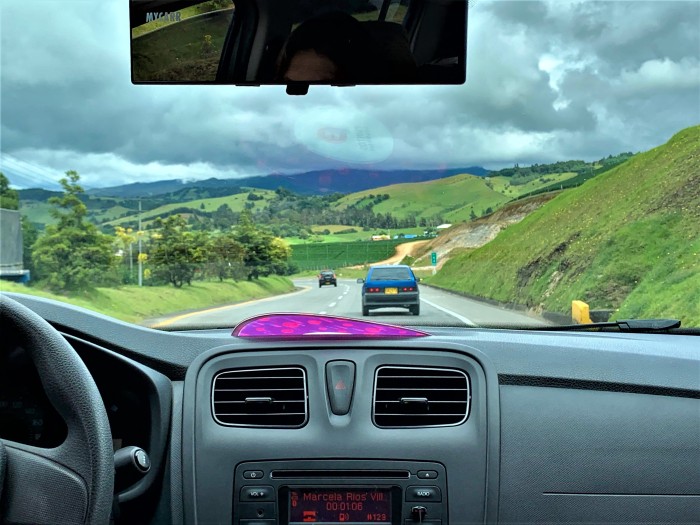 A chocolate shop/museum on a side street in Villa de Leyva.

A window full of flowers. I love the year-round flowers and greenery you get in Colombia.

The town was gearing up for the annual International independent film festival and all the side streets were all decked out in preparation.