Two of my favorite things in life are road trips and small towns. This past weekend a friend came down to visit from upstate New York and we decided to head over to West Virginia— Harpers Ferry, to be exact – for a day of hiking and historical immersion. For those of you unfamiliar with the mid-Atlantic region, Harpers Ferry is this tiny, tiny town of 285 situated where the Potomac and Shenandoah Rivers meet on the Eastern Panhandle of West Virginia, and it’s only about an hour and a half from D.C. It’s a nice place, though I’m not really sure how to describe it except to say it’s one of those places that survives mostly on the merits of its past. It’s got historical cred, if you know what I mean. It’s most famous for the Battle of Harpers Ferry, John Brown’s Raid on Harpers Ferry and for changing hands eight times during the Civil War. The Civil War is Harpers Ferry’s great claim to fame and I have a feeling nothing too monumental has happened there since the War ended. At least that’s what Harpers Ferry wants you to believe; it’s one of those stuck-in-time places, complete with Civil War Reenactors, picturesquely-preserved Battlefields and historic structures, old-timey ice cream and fudge shops and even a wax museum dedicated almost exclusively to Civil War players and heroes. Like all such places, Harpers Ferry claims to be inhabited by numerous ghosts of wars and epochs past – and I’d believe it if I believed in ghosts. A sleepy little town in a small valley at the confluence of two rivers surrounded by battlefields, cemeteries, mountains, cliffs and 200-year-old buildings would be a prime candidate for hauntings, if hauntings existed. The weather was almost too nice for decent pictures, but I did the best I could with my iphone.

We stopped by the Appalachian Trail headquarters and asked for some hike suggestions. The friendly worker suggested Maryland Heights saying it was a pretty easy hike (ha!). On our way down to town, we passed Jefferson Rock (apparently, Jefferson stood here sometime in 1783, which merited the formation being named after him) and saw these two guys playing to an audience of mountains.

Another view as we made our way to the lower part of town. 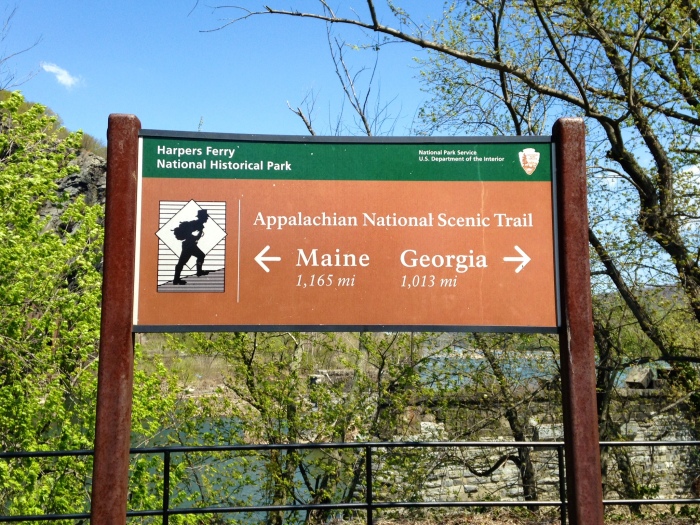 The Appalachian Trail runs right through Harpers Ferry. We had two choices: Georgia or Maine. We chose neither. Instead, we did a hike called Maryland Heights which takes you from upper town through lower town up a mountain and then to an overlook. I’ve decided that I prefer flat hiking to uphill hiking. 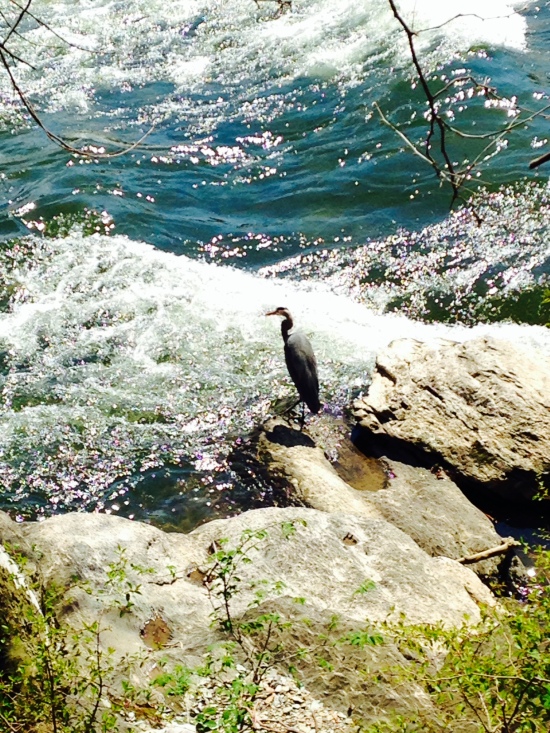 We had a picnic lunch by the Potomac. Or maybe it was the Shenandoah? I’m not good at these things.  This is a heron or egret or some other bird hanging out by our picnic site. We saw a lot of these. It was nice to be so close to the river. Even though it’s very possible to have a Picnic by the Potomac in the D.C area, this felt a little different. Maybe it was the absence of people?

We walked along the C&O Canal before heading up the mountain. 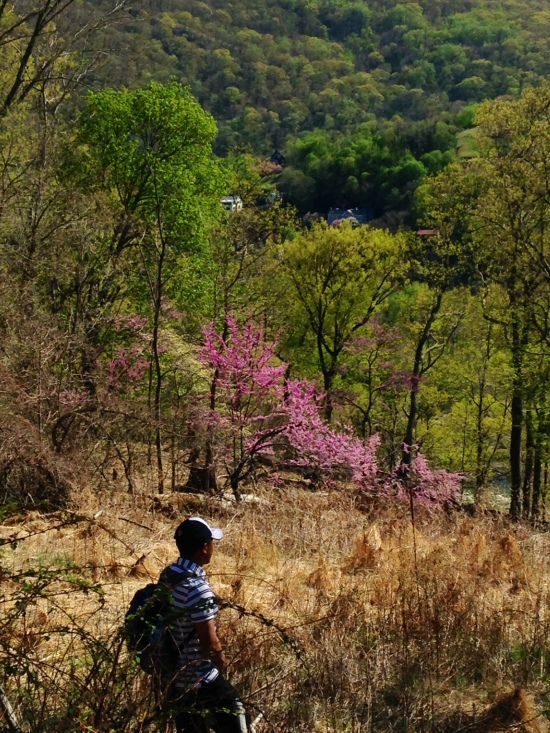 The lady at the AT headquarters said there was just a little uphill section and described the hike as “moderate.” I was feeling energetic and enthusiastic and started off strong. After a few minutes I felt pretty sure we were almost there, but then a fellow hiker mournfully informed us that we were only 1/3 of the way up. A heartbreaking moment for me. The rest of the way up was completed in somber silence which is not surprising when you are carrying around legs that feel like they’re made of iron. Here we are at the half way point. Don’t you just love all that East Coast vegetation?

But then, we finally made it. It was worth it, the views of Harpers Ferry were great. But unfortunately, it was so sunny none of my pictures of town came out.

We’d probably only hiked a total of three or four miles, but I was feeling pretty dead by this point. That’s what happens when you have iron legs…

…and I forgot about the part where we had to walk up from lower town to upper town. But we did see these pretty tulips! 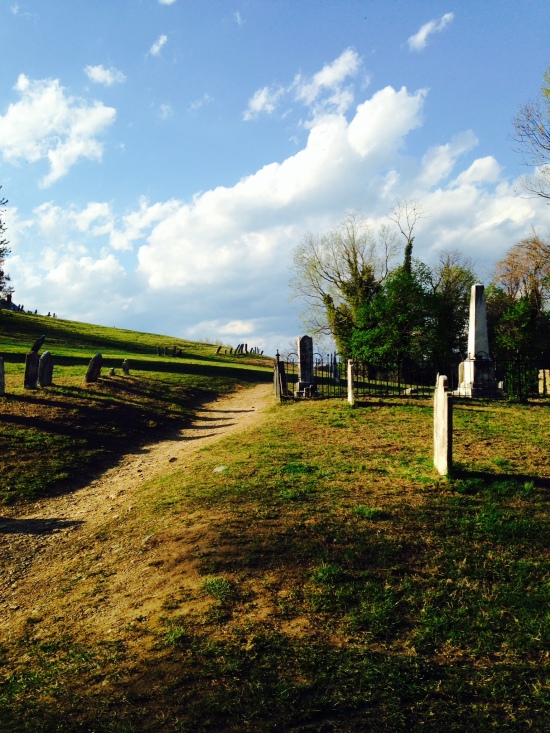 On our way up we walked through this cemetery which accurately captured mood at that particular moment.

And finally, we made it to upper town around dusk. Stately homes, huge, majestic trees, bikes leaning against southern-style porches…very nostalgic in a happy way.

After our hike, we took a look at a map (iphone map, of course) and decided to head over to the town of Martinsburg to continue our West Virginia exploration. I did a little research and discovered that Martinsburg is the largest town on the West Virginia Panhandle with a population of nearly 18,000. The Martinsburg official city website also claims it’s the fastest growing town in West Virginia with a poverty rate of about 20%. By this point it was getting dark and my camera doesn’t work very well in the dark, so I’ll just have to describe Martinsburg to you.

Upon entering the town we were greeted by the Dirty Dawg Saloon, which I figured must be some kind of biker bar. I’ve never actually been to a biker bar, but I thought the place had a pretty hardcore name and a grungy, hole-in-the-wall look to it that tough-guy (and girl) bikers might appreciate (I apologize for all the stereotyping I’m guilty of in this post). I did a little googling and learned that the Dirty Dawg Salon has mostly poor reviews except for one by this guy named Rob G on Yelp who writes, “If you are single, this is probably the best place in town to spend a Friday or Saturday night.” I couldn’t really find much more information on the Dirty Dawg, except that it was the site of a malicious wounding back in 2011. So we decided to keep driving and ended up parking in downtown. Strangely, all the side streets were densely populated with parking meters as if Martinsburg were some kind of massive metropolis in need of metered parking. I saw a few cars, but I wouldn’t exactly say Martinsburg has a tough street parking situation. Plus, we didn’t actually see any humans on the street so I really think Martinsburg needs to reevaluate its need for parking meters. But maybe things are really hopping during the week?

Anyway, back to downtown: How to describe it? You know how there are some places in America whose ethnic restaurant selection consists only of a Chinese, Mexican and Italian place? This was downtown Martinsburg. There were some old-timey buildings, a couple traffic lights, mostly closed shops (for the night? Forever? Who knows) a few diner-type restaurants in addition to the Chinese, Mexican and Italian place, and zero humans. I know I mentioned that above, but it really was troubling. It was like walking into a ghost town. There were cars around so I know people must live in Martinsburg, but I’m not really sure where they were. It took us about five minutes to walk the length of downtown and eventually decide on the Mexican place for dinner. To be honest, the restaurant was a complete Chipotle rip off. Same selection, same customize-your-order layout, same ridiculously, unnecessarily ginormous burritos. But we were hungry and the Chines e place looked a little questionable so giant burritos it was. Our burrito-maker was a fiftyish, jovial, bandana-wearing biker-looking dude with a long grey-white beard and a large white apron sprawled across his substantial belly. I wouldn’t be surprised if he frequents the Dirty Dawg. Despite his somewhat intimidating looks, he was friendlier and more talkative than the burrito makers I’m used to in Northern Virginia. Another surprise was the Hibiscus tea. I asked for tea and expected to be handed a paper cup for the soda machine, but instead, this skinny guy with sandy blonde hair and a few piercings who I took to be the manager (OK, I don’t remember if he actually had piercings, but he gave off that emo-skater-hipster vibe, so he could have had piercings) poured me a glass of freshly-made hibiscus tea from a fancy-looking glass bottle. Skinny dude is bringing at least a little originality to Habaneros!

One of the most interesting things about small towns to me is how everyone seems to know everyone. We were in Habanero’s for about 20 minutes and the burrito maker seemed to know everyone who came in by name. Even at my old neighborhood Starbucks, which I probably visited at least once a week for two years, no one knew my name or story. They may have memorized my order (skim-milk tall cappuccino) but my name? Who could be bothered to actually care? Another thing that struck me during our West Virginia excursion was how used to people I am. I grew up in a relatively densely populated suburb, lived in Panama City and Bogota for several years and now live in a small but densely populated city, so people feel almost as common as trees. West Virginia, unlike Northern Virginia, is replete with opportunities for complete and utter solitude. Anyway, before we finally made it home around midnight we took a wrong turn into a small, abandoned-looking trailer park across the street from a Super Walmart. And I’m not saying this just because I was in Wes t Virginia. I like West Virginia. It’s a nice state. But this particular trailer park wasn’t very nice. The drapes in some of the units looked like creatively placed sheets, some of the more decrepit looking units were held up on brick or wooden blocks and one of the trailers even had a literal junk yard for a front yard: Old strollers, car parts, trash, construction equipment, etc. I have so little experience with poverty in America. Then, we somehow ended up lost in a spooky, Martian-looking cement plant complete with gravel roads, giant cement mixing equipment, eerie train tracks and a very terrifying feeling of absolute stillness. It took us at least 15 minutes to find the main highway again. Maybe all this is not so surprising considering my (non-existent) sense of direction.

All in all, it was a great day. I’d love to have a little cabin up in the mountains of West Virginia.